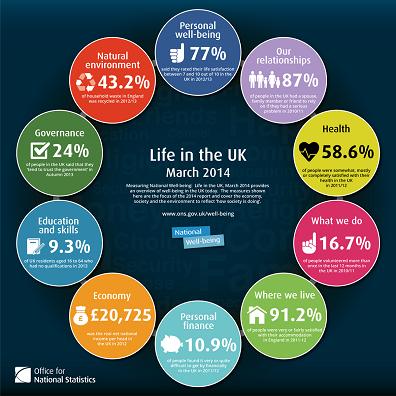 Can we capture what really matters to people, communities and the nation? Are we able to routinely measure how people are doing and the progress they feel they are making in their lives? And most importantly, if we can capture all this reliably and robustly, should it make a difference to our decision making?

There has been much debate in recent years about whether our traditional measures of economic growth adequately capture how a nation is progressing. Central to this debate has been analysis that seems to highlight that despite getting wealthier, citizens are not reporting getting any more satisfied with their lives – first highlighted by Richard Easterlin1.

The chart below shows GDP per capita and citizen Life Satisfaction for the UK, as an index commencing in 1973, and it shows that significant advances in economic prosperity have not necessarily been matched by increases in wellbeing. While there has been, and continues to be, much debate about this phenomenon there is much less debate about the need to develop additional progress indicators to complement the traditional economic ones we are most familiar with. A growing group of nations are developing such measures and the UK is among the vanguard.

The Office for National Statistics (ONS) Measuring National Wellbeing programme was established in 2010 to monitor the nation’s progress. A framework has been developed on the back of a national debate in which people around the country shared their views on ‘what matters?’ most in their lives. This isn't a framework dreamed up by policy makers and statisticians in Whitehall. It reflects, and has been shaped by, the views of citizens. To reinforce this further, measures which track how citizen’s actually feel about progress (e.g. satisfaction with health) are interlaced with traditional objective measure of progress (e.g. life expectancy). In this way different perspectives on progress can be analysed and people’s views accounted for.

ONS is also shining a spotlight on aspects of national life that have gone unmeasured or have not been valued before – natural and social capital, the economic value of volunteering and the value of the care we provide to sick family members.

So returning to the questions posed at the beginning – we are now capturing a more rounded view of national progress. The measures are maturing and they are robust.

Should this all help in policy and decision making? Yes, and it is already beginning to. Our role in the Wellbeing team is to work with colleagues across Whitehall and beyond to make use of this exciting new data. Data to support better decisions, focussed on improving quality of life and economic growth.