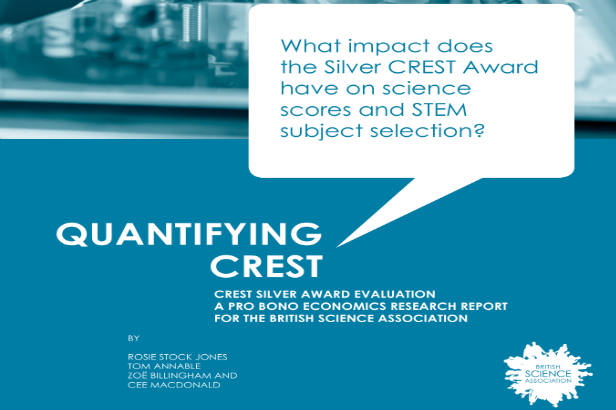 The benefits of civil servants volunteering, to both themselves and charities, were laid out in a recent CSQ article. In this spirit we’ve recently completed a volunteer research project for the British Science Association (BSA). Given the amount we learned from the project we thought it worth sharing our experiences, some of the techniques we used, and what we found. Before reading on please note that the work was undertaken independently, we were not acting on behalf of Government.

Getting involved in pro bono work with the BSA

Pro-bono economics (PBE) is a charity that matches volunteer economists, like us, with charities, like BSA, who could benefit from an economist’s skill-set. They also provide economic advice, help to manage the work and ensure published work is anonymously peer-reviewed. BSA were interested in building the evidence base behind whether or not participating in their CREST awards programme has an effect on students’ science attainment and STEM subject selection.

The CREST programme is an inquiry-based learning intervention which BSA describes as ‘hands-on science’ which ‘builds transferable skills for further education and future employment’. There are four levels of Award, but we focused on evaluating the Silver Award, which consists of around 30 hours project work typically undertaken by 14-to-16 year olds. Given BSA research interests, we sought to answer:

(i) What are the characteristics of students taking Silver CREST Awards?

(ii) Does participation in the Silver CREST Award programme have an impact on attainment in science subjects at GCSE level?

(iii) Does participation in the Silver CREST Award impact on the likelihood of taking a STEM AS level?

What did we do?

We linked the data we had on Silver CREST pupils, held by BSA, to the National Pupil Database (NPD), held by the Department for Education (DfE). This enabled us to compare the characteristics and outcomes of CREST and non-CREST pupils. When trying to ascertain the effect taking the Award has had on outcomes (GCSE science performance and STEM subject selection at AS level) it’s important to make a fair comparison, which isn’t biased by confounding factors. To do this we used a matching method called ‘Propensity Score Matching’ (PSM) which, out of the millions of pupils in the NPD who didn’t do CREST, helped us to select a much smaller group with similar characteristics to the CREST cohort. This comparison group had similar prior attainment (at Key Stage 2), similar gender and ethnicity profiles, similar proportions of pupils eligible for free school meals (FSM), and so on. There were, however, a number of unobservable factors, such as teacher and pupil enthusiasm, which we could not match on.

What did we find?

We found that students who participated in Silver CREST were broadly representative of the wider pupil population in terms of gender and ethnicity. However, the CREST students were also different in many respects. For example, they were substantially less likely to have been eligible for FSM and had achieved stronger results at KS2 across all subjects.

Even after controlling for these differences we found that CREST pupils achieved half a grade higher on their best science GCSE result, compared to a statistically matched control group. The effect was slightly larger when looking only at FSM pupils. When looking at the impact of CREST on STEM subject selection at AS level we found CREST students were 21% (or 14 percentage points) more likely to take a STEM AS level than students in the comparison group. Again, the difference was larger for FSM pupils.

Because these results come with the significant caveat that we weren’t able to control for influences like pupil enthusiasm, these cannot be interpreted as the ‘causal’ effects of taking Silver CREST. However, our research suggests that CREST awards appear to be having a positive impact. To test this, our main recommendation is to design a randomised control trial (RCT) to take the evidence behind CREST to the next level.

What did we learn?

We learned a lot from the project, too much to detail here, but these are our main takeaways: