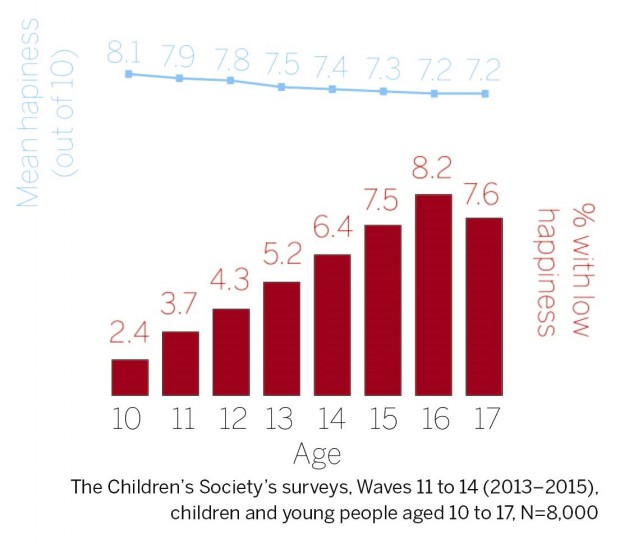 How are children in the UK doing? There is a growing body of high quality evidence on this subject and some deep expertise within UK universities, think tanks and charities. Recent research has indicated that UK children are lagging behind on wellbeing compared to their peers in other countries and that happiness reduces with age (chart above). So in December we brought together experts and policy makers at an event in Admiralty House to discuss what the evidence is showing, some key policies and what these might mean for children’s wellbeing in the future.

The growing evidence base on children’s wellbeing

The Office for National Statistics is periodically assessing the wellbeing of children (aged 15 and below) as part of its Measuring National Wellbeing programme. Progress is tracked against a set of 31 indicators related to important areas of children’s lives including health, relationships, personal wellbeing and education.

Others are making important contributions in this area too, including The Children’s Society with their annual Good Childhood reports, the survey of Health Behaviour in School-aged Children (HBSC) which provides a rich source of data particularly on risk behaviours, and the University of York which has produced regular reports on the wellbeing of children since 2001.

At our workshop we heard from the experts that despite the wealth of data and evidence there are measurement challenges particularly around understanding the wellbeing of the youngest children and of specific groups like looked after children. Local data to understand variation across communities is also not readily available.

So how are children doing?

Very well across many indicators – with evidence from the HBSC showing falling smoking and drinking levels among 15 year olds, improving educational attainment and a decreasing proportion of children living in relative low-income households compared to 2009. However, the research points to a number of challenges to children’s wellbeing particularly that children don’t appear to be getting happier in clear contrast to the gains in recent years among adults (16+years). Also, by international comparisons UK children have lower life satisfaction than their peers in many other comparator countries.

So what are the issues? A few of the factors which are particularly associated with lower wellbeing include bullying, poor quality of relationships with parents and satisfaction with appearance.

According to the ONS around 1 in 8 children report being frequently bullied. Of children who reported relatively high life satisfaction in 2011–12 only 3% reported being bullied often. In contrast, of children who reported being relatively unsatisfied with life overall, 21% were being bullied often. Interestingly on cyber bullying, the HBSC survey shows that the proportion of young people reporting being cyberbullied increases with age from 11 to 15 for both boys and girls while more traditional forms of bullying decreases with age. 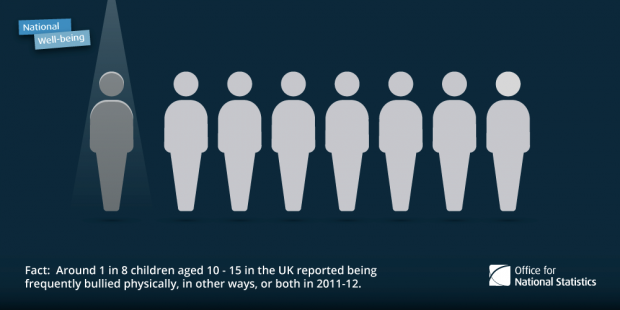 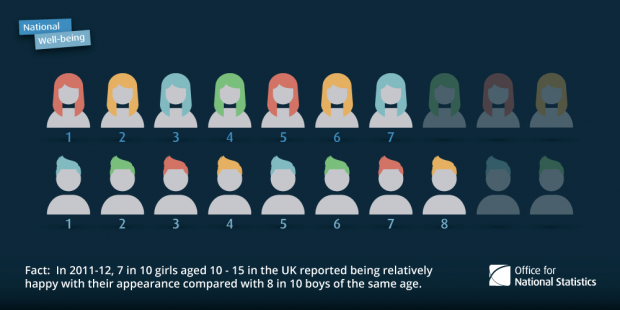 Our event heard from policy makers and practitioners on the policies and interventions that are likely to impact on children’s wellbeing over the coming years. For example evidence shows that the inter-parental relationship is an important influence on child outcomes, and there is therefore a range of provision to help strengthen the couple relationship. This includes providing preventative support and help for couples experiencing difficulties, and a number of interventions are also being piloted. The Family Test helps policy makers recognise and make explicit the potential impacts on family relationships in the process of developing and agreeing new policy. There are also programmes to promote resilience, life skills, social action, and ‘character’ among young people with evaluation results emerging that these can boost wellbeing, empathy and ‘grit’ among those who take part. All this is important both in itself and in light of research – such as that from the Early Intervention Foundation – showing how social and emotional skills among children predict wellbeing as an adult.

Understanding what works and the impact different policies have on children is crucially important and there was a call to use common wellbeing measures, like the ONS4, in policy and service evaluations. By doing this, we will be able to track the impact and then compare consistently with other policies and national trends.

Thanks to all those colleagues who contributed to the event – particularly our co-organisers The Children’s Society and ONS. Please leave a comment below if you have questions on the event or want to highlight any relevant research or initiatives on children's well-being.